Today, I would like to chronicle a small story of an event that happened to me just a few days ago.  It’s an interesting story that truly shows how small the world is, how awesome the film community is and how our cameras are more than what they appear to be.  I will try to regurgitate this story with clarity to the best of my ability, so please bear with me.  I would like to tell the story from my own perspective and order of events, even if they aren’t purely chronological.

As most know, I am a middle school teacher with an after-school film photography club.  My school is tiny and our school community with students, staff, and parents is extremely tight knit.  I am pretty much known as “that guy” when it comes to photography and technology since I teach both subjects at the school.  Due to this dynamic, this next event was made possible.

About two or three months ago, a parent of one of my photography students asked to speak to me after hours.  At the time, his wife/the student’s mother was still battling cancer, but sadly, she has since passed away.  I thought maybe it regarded this sensitive topic.

He brought me to his car and told me he had some photography equipment for me.  At the time, I thought it was his personal gear [when i received this package, I later developed an exposed roll of film left in one of the cameras, thinking they were photos that he took.  I also made a few digital prints from some scans I did of the roll as a gift to say ‘thank you’].  About a week later, I learned from his daughter that he picked up the gear at a garage sale over that previous weekend.  He paid a negligible amount of money for the gear and said, “I saw this stuff and thought of you.  If you want it, you can have it.  Use it with the kids, use it for personal stuff, it doesn’t matter.”

He lifted the trunk of his car with a camera bag and two cardboard boxes worth of film things.  The cardboard boxes contained some generic darkroom and studio equipment: developing trays, paper, old packets of developer, tripod, light stand, studio strobe, and so on.  Some really useful things that we use quite often in our club now.

He then opened the camera bag.  According to my coworker, I was really bad at hiding my emotions and excitement.  I thought I was going to see your run of the mill film SLR; perhaps a Canon AE-1 or something of the like.  But instead, I was gifted a Rolleiflex 3.5f with a 75mm Zeiss Planar and a Yashica Mat 124.  I use the Yashica to introduce the kids to TLRs, but I’ve kept the Rollei by my side.  In regards to the Rolleiflex, I truly couldn’t believe how lucky I felt. Needless to say, I was elated.  I was and still very much am sincerely grateful. 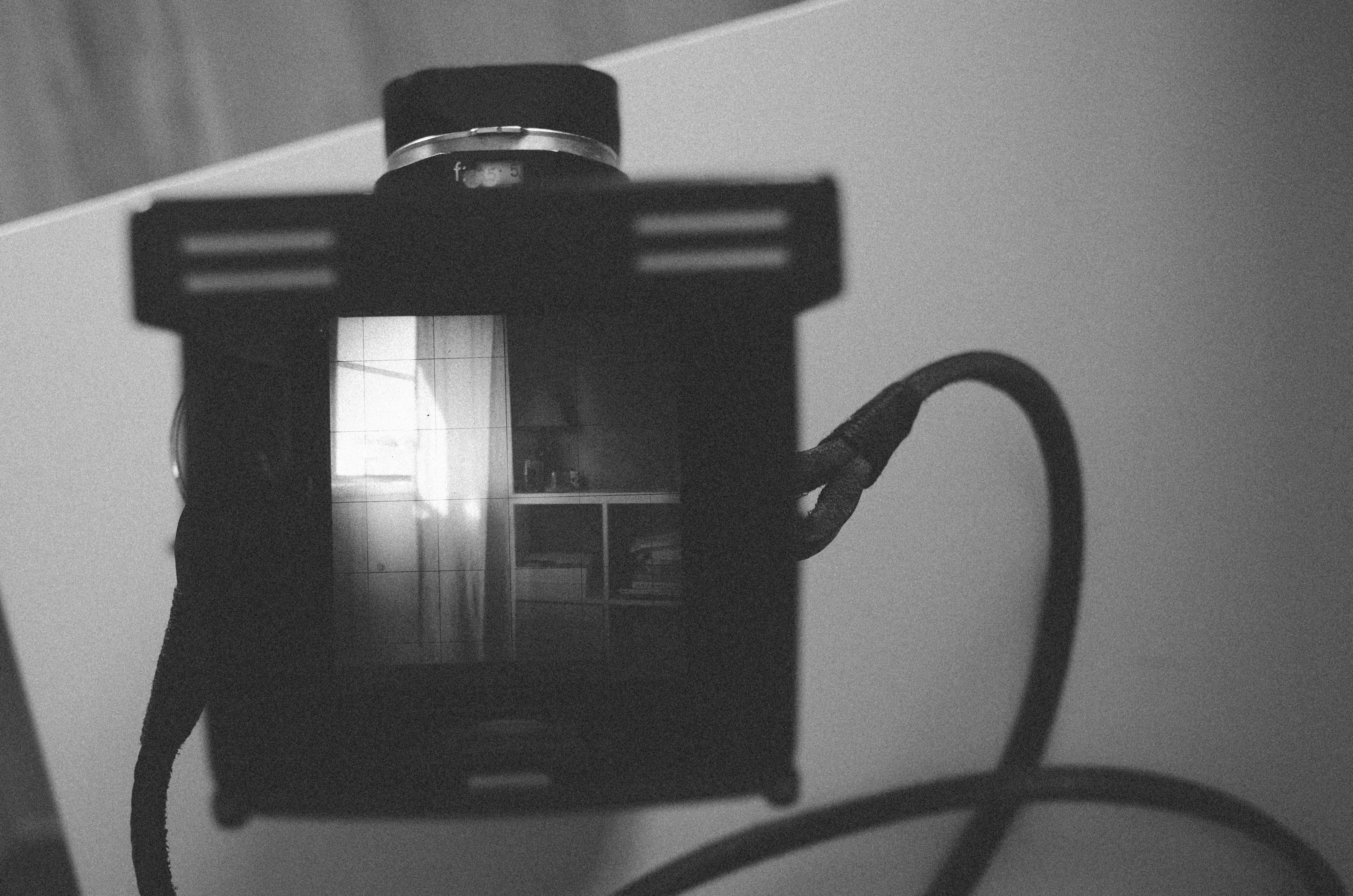 Since receiving the camera, I have debated putting it up for sale, perhaps to find some other gear or maybe doing something for my photo students.  I felt I couldn’t justify having a camera that had such value when I could do more practical things like buying many more cameras, buy film, or darkroom supplies for the after school club, or maybe trading it for something different for myself.  I guess it was technically was mine after all.  Over the course of a month or so, I struggled with the idea of keeping the camera or letting it go.

I felt that receiving a camera as a gift because someone specifically thought of you as the recipient is a bit different than someone saying they have a bunch of old cameras laying around in my attic and they don’t know what to do with — so they dump them on you.  I realized that something about letting the camera go just didn’t seem right to me.  So it stayed with me for the time being.

Fast forward to just a few days ago.

A couple of days ago, a coworker of mine (the same one who was present when I received the Rolleiflex  and who also has an interest in film) sent me a link that directed me to an Imgur post that included a story that originated on Reddit regarding a Rolleiflex.

Long story short (you can click through to read it verbatim), a man had a Rolleiflex camera that belonged to the Roosevelt family.  Yeah, that Roosevelt family.  He posted the story of these cameras to /r/history just to share the amazing story  and uniqueness about these cameras.  Another user gave a fairly verbose response to the cameras, assisting in identifying and informing OP more about the cameras, even offering his expertise and assistance. 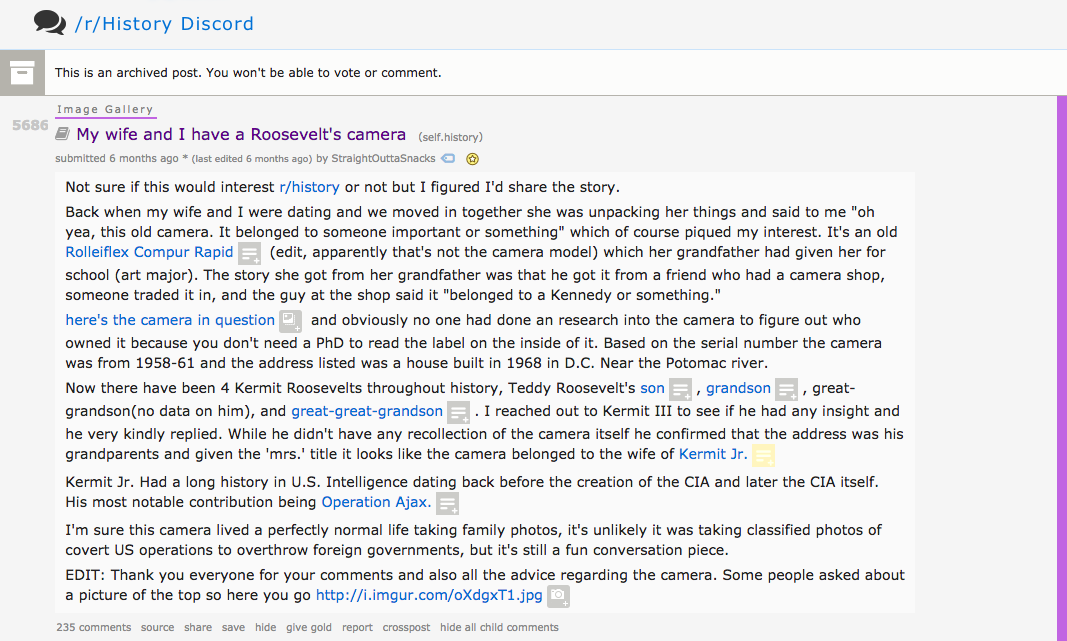 A third person chimed in with a (drunken) comment to the helpful commenter, stating that his father had two Rollei’s he wanted this helpful commenter to have due to his apparent knowledge and passion for film photography.  These cameras did in fact end up being sent from one Reddit user to another.

At the bottom of the Imgur post that summed this all up, I checked out the Flickr link that was provided which included photos that he took with the gifted Rolleis.  Upon scrolling through the photos on his Flickr page, I couldn’t help but notice a gleaming familiarity with these images.  Once I saw a certain photo, it had hit me.  The owner of this Flickr account, who was the recipient of two Rolleiflexes from another Reddit user, was someone who was  previously featured here on Now Developing.  That person being Derek Boswell.

Once I realized this, I messaged Derek via Facebook and explained this longwinded revelation to him.  I told him how crazy I thought it was that this Imgur post about the Reddit cameras was forwarded to me by a coworker, simply by chance.  I also explained how I was also gifted a Rolleiflex and was previously playing tug-of-war with the idea of letting it go.  However, once I read the story and realized who it was attached to, it was obvious that I could never, ever sell my Rolleiflex or let it go.  It was really touching to see that Derek and I shared very unique stories of being gifted such iconic and beautiful cameras.  We’re both very lucky, to say the least.

Derek and I have since agreed to make a pact that we won’t let these cameras escape our ownership.  Hopefully, Derek and I will also be able to meet up and take some photos together in the coming months and hopefully you’ll see more of his work posted here in the future.

With all this being said, the world is a really small place.  This story has made me reflect a bit more about how great the film community is and can be.  It’s nice to feel close with people whom of which are seemingly so far away, physically speaking anyway.  It also makes me think about the stories that our cameras carry with them; some cameras have been cradled through the hands of historical families, while others have meaningful stories simply because of human kindness and chance.  Hearing these stories always give me the goosebumps, but being a part of one is all the more better.  Plus, I am pretty sure that karma exists for situations just like this.

Of all the cameras that have past through my hands and onto others, I hope that those cameras live a long journey with more interesting stories to tell.  And as for the ones I own with stories already engrained in them, I’ll be sure to cherish both the cameras and the stories within them.